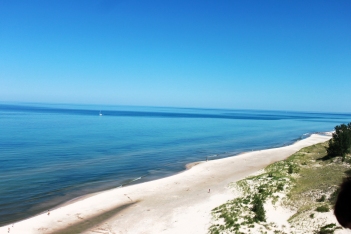 Last summer I took the kids north on a vacation that was to be spontaneous. I’ve done that two years in a row and both times it turned out great. The first year we covered a large area starting in Mears about three hours NW of home, drove up the west side of the state and ended up at the Pictured Rocks National Lakeshore in the Upper Peninsula almost seven hours from home. We had a great time but there was a significant amount of driving and I crammed so much into five days I felt like I needed a vacation after the vacation.

The next year I decided to plan it out a little better. Instead of just jumping in the truck with a general idea of where to go I mapped it out and decided on particular stops without venturing so far north. Our first stop was just south of Pentwater to visit Little Sable Point Lighthouse. We’ve been there at least a couple of times but this time the lighthouse was open so you could walk up to the top where I took this photo,